Oil Spill in the Timor Sea

This is cross-posted with Miss Eagle's "Network".

OIL SPILL OFF THE W.A. COAST 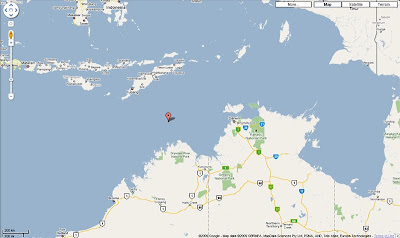 This report is extracted from several ABC News stories.

There are some interesting things to note about these reports (of course). Denis Wilson offers to guide you through these murky waters.

In a statement this afternoon, a spokesman for the owner of the unit, PTTEP Australasia, said the leak is continuing, however, the scale of the leak remains unknown.

"The Australian Marine Oil Spill Centre (AMOSC) is mobilising aircraft and dispersant to be in Darwin tonight and on-site in the Timor Sea tomorrow to begin aerial spraying of the spill.

"The size of the spill is not known.

"Approximately 40 barrels of oil were discharged from the wellhead in the initial incident - some of it into the sea.

"Since then, condensate has been discharged at pressure dispersed in the gas stream.

"It is not known how much condensate is in the gas."

It is still not clear whether the spill will impact on the Ashmore Reef or the Kimberley coastline.

The Australian Marine Oil Centre, based in Victoria, is flying truckloads of chemicals to the spill site to help break up the oil.

An employee on the rig that is spewing oil into seas off the coast of Western Australia says the spill may cover eight kilometres of ocean. ......

Crude oil began spilling from the rig about 4:00am (AEST) yesterday.

The National Offshore Petroleum Safety Authority (NOPSA) says it is investigating the incident and is unsure of how extensive the problem is. .....

Australian Maritime Safety Authority spokeswoman Tracey Jiggins says a search and rescue plane with an environmental specialist on board is assessing the size of the spill and the environmental situation.

She says a Hercules aircraft on loan from Singapore is expected to arrive in Darwin this morning, which will be used to spray chemicals to disperse the oil. ......

"Obviously we're concerned about the oil spill and about any onshore oil, so that's why we're getting the dispersements ready and hopefully that will affect the situation."

Mining company PTTEP Australasia said last night that there were no injuries among those evacuated.

PTTEP says the spill is likely to be carried away from the Australian coast by south-westerly winds.

"Oil in the water disperses naturally. With a bit of wind and choppy water the oil breaks up into smaller globules and droplets," he said.

"Chemical dispersant just aids that activity. You spray it on the oil and it helps pull the oil apart into smaller globules."

Did you get all that?

Aren't you glad that everything is under control?

UPDATE:
The ABC news at 2:00pm AEST has just carried a report that the Australian Maritime Safety Authority is now investigating this incident. That is a delay of more than 36 hours since the incident occurred. But don't worry they have lots of "plans" you can read on their website.

Am I the only person in Australia who thinks Rudd is being short-sighted in persisting in chasing Turnbull over the Auscar fiasco?

Surely if Rudd pushes too hard on Turnbull, it is more likely that the libs will panic and dump Turnbull.

Short -term victory for Rudd might sound attractive, but lets not forget that Costello has not yet left Parliament. Rudd's strategy could play into Cossie's hand - sitting there, sulking, and just waiting to be "drafted" by the party which refused to go begging to him before.

Costello would give Rudd a much closer run (if not be a walk-up start for victory) than Turnbull.

So, in my opinion, Rudd is better served by leaving a weakened Turnbull sitting there, than pushing the Libs so hard that they panic and dump Turnbull and go begging to Costello.

The desire to rub Turnbull's nose in the ignomy of an abject apology is understandable. But Rudd risks over-playing his hand.
Posted by Denis Wilson at 00:08:00 2 comments:

Email ThisBlogThis!Share to TwitterShare to FacebookShare to Pinterest
Labels: Costello, Rudd, Turnbull
Newer Posts Older Posts Home
Subscribe to: Posts (Atom)
REMEMBER: "IT IS BY BEING QUIET AND POLITE CITIZENS WE ALLOW OURSELVES TO BE IGNORED"