Is this "The Split" all over again - or merely the Bonfire of the Vanities?

I am not a Labor Party historian.
I am just old enough to have some political memory (more than most "reporters" in the Media, it seems).
I distinguish "reporters" from "Journalists" who are few and far between in this issue.
So, is it once again Queensland (this time Rudd) against Victoria (this time Gillard)?
Or is it Catholics against the Non-Catholics?
No doubt it is no that simple.
Such things seldom are.
But consider HV Evatt and BA Santamaria with Vince Gair as the Wild Card.
Maybe it is simpler than that.
There is a decided anti-feminist streak in the Santamaria and Gair groups in that scenario, and in the modern re-play, we know about Tony Abbott, and Rudd is not in favour of female Prime Ministers, or at least, all of them we have had so far in Australia.
And then there is the mysterious link to Abbott's endorsement of Chris Uhlmann and Uhlmann's own track record of anti-abortion advocacy.
My own memory of The Split is limited. But what I do remember is very unpleasant, and at the time, mysterious.
I look forward to the time when the ABC holds an Inquiry into the goings-on behind the scenes before that 4 Corners story which played a major part in manufacturing this debate. There is so much more which has not been said about the role of the Media in all of this mess.
Ok, the Media did not create it, but they surely have poured a big can of diesel on the Bonfire.
To steal a good title - "The Bonfire of the Vanities"
**********
At the very least People ought declare their personal baggage in this debate, as I have always attempted to do (in this Blog).
My own personal baggage includes a stint as a former Seminarian.
That give me a parallel, but NO link with Tony Abbott and Chris Uhlmann.
But before anyone gets excited about that, it also links the three of us with Joseph Stalin.
Posted by Denis Wilson at 17:28:00 2 comments:


Prime Minister Gillard and I and the overwhelming majority of our colleagues have been applying our Labor values to the policy challenges in front of us and we’re succeeding despite tremendous political obstacles.

For the sake of the labour movement, the Government and the Australians which it represents, we have refrained from criticism to date.

However for too long, Kevin Rudd has been putting his own self-interest ahead of the interests of the broader labour movement and the country as a whole, and that needs to stop.

The Party has given Kevin Rudd all the opportunities in the world and he wasted them with his dysfunctional decision making and his deeply demeaning attitude towards other people including our caucus colleagues.

He sought to tear down the 2010 campaign, deliberately risking an Abbott Prime Ministership, and now he undermines the Government at every turn.
He was the Party's biggest beneficiary then its biggest critic; but never a loyal or selfless example of its values and objectives.

Julia has the overwhelming support of our colleagues. She is tough, determined, forward-looking, and has a good Labor heart.  She has a consultative, respectful relationship with caucus while Kevin Rudd demeaned them.

She's cleaned up a lot of the mess he left her and has established a good, Labor agenda.  She's delivering major reforms, and getting things done that her predecessor could not.  Colleagues are sick of Kevin Rudd driving the vote down by sabotaging policy announcements and undermining our substantial economic successes.

The Labor Party is not about a person, it's about a purpose.  That's something Prime Minister Gillard has always known in her heart but something Kevin Rudd has never understood.

Rudd has "spat the dummy"

Mr. Rudd has "spat the dummy"
He has announced his resignation with "Great Sadness" - what utter bullshit.
Everything else in his statement is tainted by that very opening statement.

He is saying to Caucus they need to choose who is best placed to defeat Tony Abbott.

In answer to the query is he jumping or being pushed?
He is doing the Jumping, even if Simon Crean and others were behind him on the Diving Board, bouncing the Board up and down - urging him to jump.

The good thing is that if it goes badly for him (I hope so, but cannot be sure) then at least he will be seen as the one to have triggered the disaster.

Not that it really makes much difference in the end.

Bring on Penny Wong and Tanya Plibersek I say.

Personally I can not ever forgive Rudd for repudiating his statement that "Climate Change is the greatest Moral Challenge of our generation".
That was the last thing he said WITH which I agreed.
He walked away from it, in the face of pressure from the Miners.

THAT WAS A GUTLESS DECISION, LACKING IN LEADERSHIP.
LACKING IN INTEGRITY.

All that has happened since has been a sad decline in standards, judgement.
His lack of political leadership was terminal, and remains so. 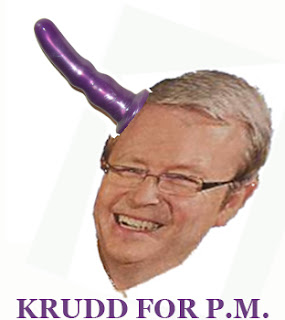 I don't think so. DJW
All political comments are my own.
I stand accountable for them.
Posted by Denis Wilson at 18:17:00 2 comments:

The real reason as to why Labor is Dead, Dead, Dead

There is an extraordinary dichotomy in political donations.
Traditionally, industry likes to at least appear to be even-handed
(or at least pretend to be).
No more.

This alone indicates to me that Labor is Dead, Dead, Dead.
That chart comes to us, courtesy of Crikey.
The full article is available to be read here:
http://www.crikey.com.au/2012/02/21/the-rise-and-rise-of-mining-company-donations/
This has nothing to do with any supposed Challenge to the Leadership.
Really???
Well, just think about it.
It was Kevin Rudd
who totally antagonised the Miners in the first place.
Well, hardly  in the real "first place".
Gough Whitlam had laid the groundwork of that,
back in the Post-Menzian Days
Links have been provided for any
ABC Journalists who happen to read this -
for they will have NO IDEA about whom I am talking.
But we all remember the anti-Mining Super Tax ads
which were placed by the Mining Industry,
and led directly to the sacking of Kevin Rudd.
So let us not kid ourselves that Kevin Rudd is likely to be the saviour of Labor.
He killed Labor (as evidenced by that chart above)
before Labor tried to kill him.
And even that task has not yet been completed.
The "Undead" are emerging, again, it seems.
What ridiculously short-term memories the Media in Australia have.
And they assume we, the people, are as stupid as they, the media, are.
Well, they are probably right about that!
Its all enough to make me want to emigrate.
But where to?
Posted by Denis Wilson at 16:17:00 No comments:

Bloody Martin Ferguson AM, MP has no shame - or no understanding:
This guy will single-handledly (well, he and the Miners anyway) destroy Australia's rural lifestyle.

The city-dwellers will mostly be OK, as long as they can still get jobs somewhere, or the State can pay them to sit on their arses, and watch TV.

But the Farmers will be driven off their lands, but the Grape-growers in the Hunter, and the Racing Stud Farms will both be OK.
But broad acre farmers are stuffed. CSG mines will strip the water away, or poison the rest.
Posted by Denis Wilson at 17:11:00 No comments:

Email ThisBlogThis!Share to TwitterShare to FacebookShare to Pinterest
Labels: economy, Ferguson, Mining
Newer Posts Older Posts Home
Subscribe to: Posts (Atom)
REMEMBER: "IT IS BY BEING QUIET AND POLITE CITIZENS WE ALLOW OURSELVES TO BE IGNORED"