Sleeping Lies will Dog You, Cardinal Pell.
It is with shame and disappointment (but no surprise) that I read today that Cardinal Pell is still sticking to his legalistic line regarding an "apology" to Mr Jones, the man at the centre of a sex abuse non-apology which Cardinal Pell filibustered over, prior to the Pope's visit.

You may read the story in "The Age" (Fairfax) website today.

For goodness sake, Cardinal Pell, get on with the job which is surely to deliver JUSTICE - if you know what the word means - to Mr Jones. Stop being "political" just for a moment, if you can. Fix the problem. 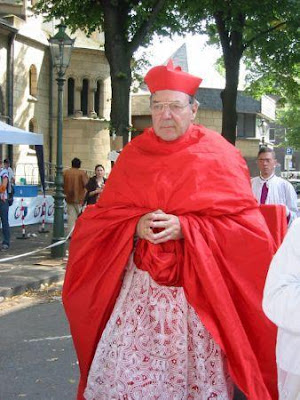 Admit that Jones was abused.
Admit that you covered it up.
Face the truth.

Then, get on with delivering justice to all other victims of sexual abuse by members of the Catholic Church in Australia.

If you do not do this, other lies will continue to dog you, Cardinal Pell.
Posted by Denis Wilson at 17:50:00

G'day Denis,
Love the heading.
Dunno what you're on about though. You can see in the man's face that he is sincerely pious and just! (Laughs to self).
Gouldiae

Yes, it my favourite photo of Captain Pius!
Denis