The news of the Wingecarribee Shire Council election results spread fast. The "Old Guard" have failed to be re-elected. The first reaction to this news was seen on Wall Street, the financial sector of New York.

Over there, the news that one of their favourite clients, the Wingecarribee Shire Council "Old Guard" had been thrown out of office sent brokers from Lehman Brothers into a spin.

Is this the world-wide repercussion from
former Councillor Murray's electoral defeat? 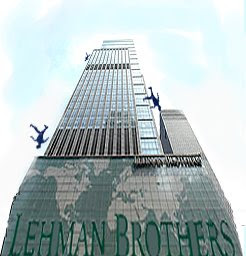 Lehman Brothers is apparently the 4th largest investment house ("bank") in the world. It is regarded as an "Institution" in the world of finance - and nobody seems to really know how costly their collapse will be for others. The world of finance literally does not know how much money is tied up, and where. It is a catastrophe too large for the US Government to rescue them from, unlike the previous bail-out of Bear Stearns.
But the directors of Lehman Brothers have sought the protection of Chapter 11 of the US Bankruptcy laws.

We in the Wingecarribee Shire know that thanks to some ill-advised investments, we the people stand to lose money.

We already knew that we were going to lose those Collateralized Debt Obligations (CDOs). Now we will probably lose the entire tranch of funds invested with Lehman Brothers - some $57 million.

It makes the loss of $2.55 million on the first "deal" with Lehman Brothers whereby they bought back our $3 million investment in one group of their CDOs for $450, 000 seem trivial in comparison.

Who is responsible? In truth it must surely be all the Councillors of the former Council, and the General Manager.

Lets hope the new bunch do a better job. They could hardly do worse.
Posted by Denis Wilson at 22:20:00