Good things happen at the height of summer.
In Robertson, it usually means we turn off our heaters (in my case, I did that last week).

That is good for Global Warming, as my heater not only gently warms (and dries) my bedroom; but by using electricity, it has meant unnecessary generation of power, by coal being burnt somewhere else in the State of NSW.
Wallerawang Power Station, near Lithgow, NSW
(Image courtesy of Wikipedia - Photo "Amitch") 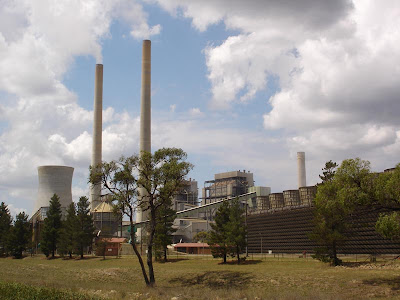 In these Post-Copenhagen Days of Apocalypse, it means I was (until I turned off my little heater last week) killing the Planet faster than it will otherwise die. The world will die of natural causes - by converting itself to a "Red Giant", but "experts" predict we have 5 Billion years.


You can see that I am "Over" Copenhagen.

I have read every Press Release and the transcript of every interview and "doorstop interview" which Senator Penny Wong has given on the subject. I am totally disillusioned with this Government's pathetic attempt to justify propping up the largest polluting industries (including the so-called "Trade Exposed Industries", notably the coal miners, cement producers and the Aluminium industry (the majority of which are overseas owned or controlled anyway).

I ask (naively) - whatever happened to Socialism, Social Responsibility and Environmental Values?

Big polluters ought be stopped in their tracks!
They cause the problem; I say - let them pay the cost of the clean-up.
The last thing we ought do is reward them, with cash bonuses, let alone huge cash bonuses, even if dressed up as "incentives".

This Government has no corporate memory.
It does not understand how huge Multinationals will bully Governments, promise them everything, then do nothing whatsoever.

I remember the deals Bob Hawke did with Kodak to keep open a processing plant in Coburg - in his electorate of Wills. What happened - he gave them huge incentives to stay open- they accepted the handouts, and closed the plant several years later.

I was in Scotland in 1975 when Harold Wilson was British PM. (Yes, dear reader, I am very old, but, I was once a "bright young thing". :-))
So, unlike most modern Politicians, I have a long political memory.

Harold Wilson was worried about votes in Scotland, and so did a "deal" with Chrysler (remember them?) to keep open the British Leyland (remember them?) car plants in Linwood, Scotland (close to Glasgow). He threw millions of British Pounds at Chrysler; they accepted; Wilson resigned prior to the next election, and handed over to James Callaghan (remember him?) and Chrysler closed down the plants anyway. That was during the British "Winter of Discontent" which led to Margaret Thatcher's rise to power. (Who can forget her?)

What is the moral of this little history lesson?

Big companies do not need to stand for re=election, and they know they can outlast Politicians (who do). That holds true for Kevin Rudd and even Senator Wong.

But huge corporations and industries keep on going - even if they change their names.
Counting "Carbon emissions"

The whole fallacy of the Climate Change debate has its seeds in the Rio "Earth Summit" (1992) (remember Ros Kelly *** "saving the world for her children"?), which led to the Kyoto Protocol (1997) and then the Bali Conference (2007).

The basic flaw is that countries are allowed to calculate the amount of Carbon Dioxide (or equivalents) they emit. "Emit" is taken to mean burning coal (or equivalents) which results in carbon dioxide being formed and released. These are the so-called "Greenhouse Gases", and the calculation is of the man-made (anthropogenic) component of those gases in the atmosphere.

Fine, I understand why that is counted that way.

But that simplistic division of responsibility for pollution allows the Australian Government to campaign for a reduction in CO2 emissions, while, simultaneously, the Government has its senior (ex-Union) Ministers planning to double the coal exporting facilities and the railways to bring coal from the mines in the Hunter Valley and Liverpool Plains, in NSW, and the Bowen Basin in Queensland.

You cannot burn coal if you keep it locked away in the ground. We should count the coal we produce, not count the "carbon emissions" in the countries to which we sell our coal.

We have no problem recognising why Asbestos ought be kept in the ground. Why not coal?
Coal is vastly more polluting, and highly toxic.
Don't believe me?
Read this brief report of Dr van Steenis's recent findings in NSW.

We have a Federal Government which is either schizophrenic or hypocritical.

I cannot tell you which it is. You ought make up your own mind (or if you are like the Federal Government (minds). (That's a hint!)

I accept responsibility for any political commentary in this post.
Denis Wilson, (enrolled voter)
Robertson, NSW, 2577

Blank
*** These days Ros Kelly is living in seemingly quiet seclusion in Kangaloon, in the Southern Highlands of NSW. She is therefore a 'local' as far as my Blog is concerned.